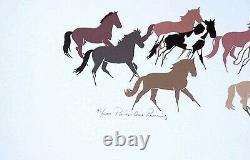 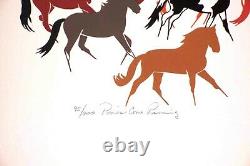 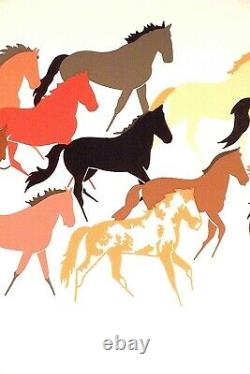 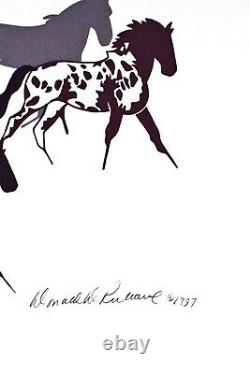 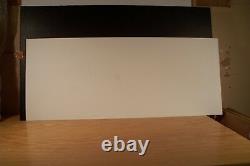 This print is in the classic Sioux pictograph style and was produced in 1997 as a limited edition of 200 signed and numbered, 28 Artist's Proofs and 2 Printer's Proofs. Martin John Graphics of Denver, Colorado printed these serigraphs from the original painting. Size was dictated to be the same size as THE WHITE BUFFALO so it could be a companion piece to that 1993 limited edition serigraph. As a professional artist and teacher it was very important and a point of pride for the artist that the leg position on each of the running horses is in the anatomically correct position. Each print was hand signed and numbered in pencil by Mr.

Also, each print was hand registered and hand pulled in the process of printing. Only the highest quality materials were used at the insistence of the artist. All are in pristine condition as the inventory approx. 140 prints was put in secure storage in 1998 and only recently brought to my home in Nebraska. Born on the Pine Ridge Reservation Mr. Ruleaux was raised and schooled in Gordon, South Dakota. After graduating from high school he joined the Navy. After his discharge he attended art school in Kansas City. Chadron College in Chadron, Nebraska awarded him a B.

He then commenced a career as an art teacher for K thru 12 that lasted for 33 years. During that time he obtained a Master's Degree in Art Education which was immediately followed by a prestigious year long fellowship in Washington, D.

Ruleaux's accomplishments in art include many first place and best of show awards at art competitions throughout the country. His teaching career now spans forty years and includes being named Nebraska's Art Teacher of the Year (2012) with the award being presented by the governor of Nebraska. Ruleaux's art hangs in many prominent collections both corporate and private in the United States and numerous other countries. In my opinion he is one of the most skilled of the Native American painters.

It is therefore highly desirable to add his art to any collection. That does not include the A/P's which sell at a premium over the signed and numbered prints. PONIES COME RUNNING is one of twelve prints commissioned from Mr. Ruleaux that were available from the gallery: Four offset photolithographs, four serigraphs and four lithographs from stone tablets. PONIES COME RUNNING was the fourth and final serigraph of the serigraph series.

These 5 p rints are not matted nor framed. The asking price is for a single print. This item is in the category "Collectibles\Cultures & Ethnicities\Native American: US\1935-Now\Paintings & Drawings". The seller is "lawrencega_0" and is located in this country: US.